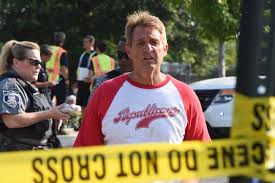 On June 13th, our nation woke up to the second attack on a United States Congress member since the tragic 2011 shooting of then Representative Gabby Giffords. What resulted from the shooting in Alexandria, VA was five people wounded and one fatality. A quick glance at the assailants’ social media page, we see a man whose hatred towards the current presidential administration runs deep. From the posting of conspiracy theories, to direct statements indicating his contempt for President Trump, a picture of an anti-Trump and anti-GOP fanatic begins to emerge. It is without question that the past 140 plus days of the Trump administration has been filled with scandal, political dishonesty, but above all, HATRED. What do I mean by that? Simple. Election 2016 polarized our country in a way not seen in recent memory. From the social media attacks pitting one political party against the other to the overt physical violence seen at Trump’s presidential rallies, the American political system has become a breeding ground for viciousness and hatred.

On a personal level, the magnitude of the hatred present in the American political climate manifested itself when I joined the political arena. In 2017, following the election of Trump, I officially joined the ranks of political commentary. From all accounts, I have been dubbed the “liberal commentator” on conservative cable news networks. I took my new title as an opportunity to have a platform to express the views and ideologies of those individuals who look like me, think like me, and are often left in the shadows of political discourse. However, what I quickly realized was that while I saw my new found liberal commentator hat as an opportunity to enlighten others, the audience found it as an opportunity to take out their hatred on the “political left.” From N*gger to c*nt, to b*tch.  After each media hit, my email and social media were met with a barrage of hateful comments and death threats. While I always welcome constructive feedback, receiving ten death threats that depicted my death through lynching was not that. Instead, what these evil acts and iniquitous political rhetoric underscored was that our political system is intrinsically broken.

We live in a society that believes questioning the president equates to someone being anti-American, we live in a climate where people shoot innocent people merely because they belong to an opposing political climate, we live in a time where the first black president of the United States is depicted hanging from a noose. Ladies and gentlemen, we are not talking about a faraway place in Narnia, rather, I want to welcome you to America 2017. We can search as far back as 1858 when Representatives Grow and Keitt exchanged fist blows on the Congressional floor as a marker for a longstanding history of violence in our political system, but the vile political attacks we have experienced as a result of election 2016 is a new breed of hate. Something scary. Something lethal.  With the advent of social media, people can spew the vilest and hateful of transgressions against each other under the cloak of technology. Not only is this dangerous, but it is also fatal.

We can no longer point fingers.  We as a nation have to accept full responsibility of what we have allowed our country to become. We have allowed hatred to fill our hearts, pour into our political system, and destroy an already shaky democracy.

Our country is not divided, we are broken. Until we put politics aside and realize we are one people and therefore must treat each other as humans irrespective of our ideologies, lives will be lost, tragedy will continue, and our nation will remain broken. History has a weird way of repeating itself, and we are witnessing the fruit of the hatred we have sewn. Let us use the shooting in Alexandria, Virginia as a lesson. If we continue to allow hatred to seep into our democracy, we have allowed hatred to be the downfall of our democracy.